In a field of so many great keychain-size tools offered, why would you stop to give the Leatherman Style PS a second glance? The answer can be summed up in three letters: TSA.  This bladeless offering is a great travel option. And don’t get me wrong, it’s not a half-baked compromise tool either. 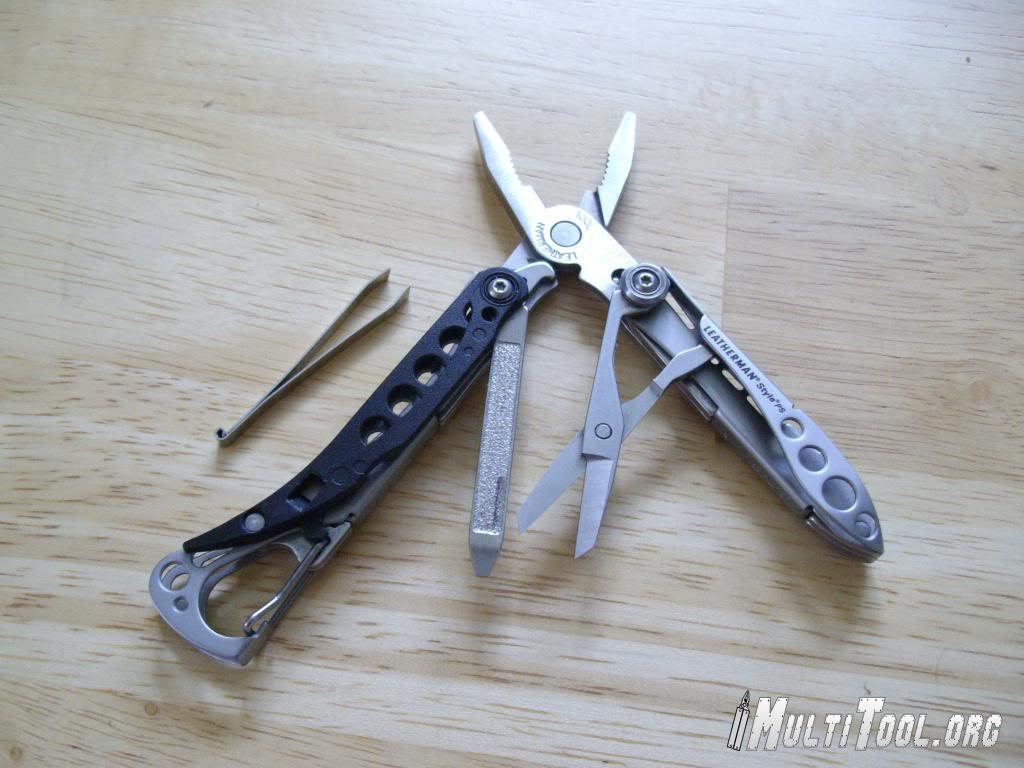 The Leatherman Style PS is constructed mostly of stainless steel, with a black fiber reinforced nylon (FRN) panel on one side. Its overall length when closed is 3” (76mm). Width is 3/4” (19mm), and thickness is 3/8” (9.5mm). Unlike its brother, the Style CS, there are no options for different colored FRN panels. Except for the plier head assembly, all tools are accessible without opening the multitool.

The tool is focused around the plier head. Like all keychain size leatherman tools, the pliers are spring loaded using cams and backsprings to give a good opening force without compromising the plier head strength. The tips of the pliers are incredibly precise, with virtually no side-to-side wiggle in the plier head. Dentitions on the pliers are fairly aggressive and well formed, giving great grip. The wire cutters are surprisingly capable, and will cut 12 gauge copper wire convincingly. In the open configuration, the ergonomics are fantastic.

On one tool handle, there is a pair of small scissors. These are on par in quality and cutting capability as those found on 58mm Victorinox knives. They will cut day-to-day items quite well, although the short length may take some time going through long sections of material. Where they may surprise you is if you find a need to cut cloth, paracord, or similar soft but bulky material. In these cases, they are excellent. I also found the scissors to be a very adequate replacement for most small blade needs. This tool came with me on a Christmas vacation, and got a workout opening taped boxes and packaging.

On the other handle, there is a combination nail file/small screwdriver, a carabiner/cap lifter, and a pair of tweezers.

The nail file is adequate, with a sort of sandpaper texturing common to most Leatherman keychain tools and the 58mm Victorinox knives. The screwdriver is a flat/Phillips. It will slot into very small flatheads (although not as small at eyeglass screws), most small Phillips screws, and larger ones up to the common #2 size. With care, it can turn screws in door hinges, but is realistically for much lighter duty tasks. The reach of the screwdriver is surprisingly good for such a small multitool.

The tweezers are set into a slot in the FRN scale. They have a slight angle to the tip, and work as expected, and on par with those of 58mm Victorinox knives.

The Carabiner clip/cap lifter makes retrieving the tool from a keyring very easy. As a caplifter, I found it somewhat awkward initially, but it works better than most keyring size multitools once you get the hang of it. While I haven’t had the issue personally, I have seen multiple reports of problems with this tool being lost from keychains. So, beware of the potential.

A less tangible point needs to be covered about the tool. I don’t think a review would be fair without noting the STYLE of the Style PS. Inspired by the Leatherman Skeletool, the Style series looks different from most of the competition. It almost looks like its from ‘THE FUTURE!”. The problem with that is that in 10 years’ time, you have to wonder if it’s going to look like it’s from ‘THE PAST”. I like the look of the tool, but I can’t say how that look will be perceived down the road.

I’ve repeatedly mentioned ‘the 58mm Victorinox knives’ as an intentional comparison through this review because the Victorinox Jetsetter series, a 58mm design, is one of the other TSA approved bladeless keychain multitools available. I personally prefer the Style PS to any version of the Jetsetter. Unless/until the TSA allows blades, your choice of multitools on your person while you travel is seriously limited. I think of the options available, the Leatherman Style PS is the best.

This tool can be purchased alone, or together with the Leatherman Hail pocket tool.

If you find that most of your small blade needs can actually be accomplished with scissors, I think the Style PS becomes a real contender for everyday carry. While it’s longer than other keychain tools, it’s very flat, so it should ride well in a pocket. The carabiner makes it quick to remove from keys, and it is incredibly light for the toolset. And yes, I have to admit, it just kind of looks cool.

More in this category: « Leatherman Style Review Leatherman Juice Pro Review »
back to top
Interested in this or a different tool and still have more questions?
Why not join us over on the Multitool.org Forum where our community can help you find what you're looking for!