Recently the knife and tool industry has been leaning more and more towards rescue oriented tools such as Benchmade's ERT-1/Houdini tools, the Victorinox Rescue Tool and more traditional offerings like NOV8's ResQMe tool.  Jumping on the bandwagon is traditional US knifemaker Utica/Kutmaster with their latest rescue tools. 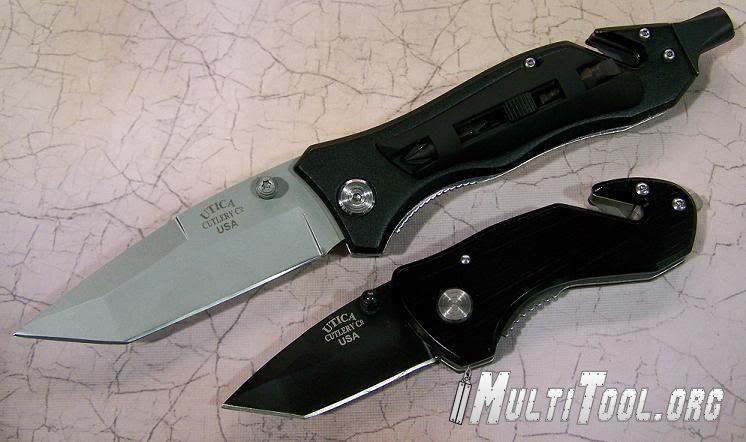 These knives come in two sizes, the larger being the more complex of the two offerings.  Both feature one handed opening, liner locking tanto pointed blades that snap open and lock up solidly, as one would expect from even a lower cost tactical type knife, and these rescue knives don't disapoint.    The blades on each knife open up with a dual thumb stud, meaning they can both be opened by right or left handed people.  Another great feature included in these knives, which you don't see on enough knives in my opinion, is an adjustable pivot screw.  Too many knives, especially those at lower price points are riveted together so the tension of the blade can't be adjusted- with the Utica/Kutmaster rescue knives, the blades can be adjusted with a couple of Torx bits.  Both knives also feature belt cutting grooves, with razor sharp blades tucked inside, ready to slice clothing or seatbelt material in an instant.

Both knives also have glass breakers, but this is where the differences start- the smaller knife has a standard hardened point on the butt of the handle, similar to almost every other glass breaker on the market- simple and effective.  The larger model has two points on opposite sides of a 1/4” socket adaptor.  While I haven't tested this yet (my neighbors are light sleepers!) I would imagine two points of contact would still shatter a car's side window with relative ease in an emergency situation.

Going along with the 1/4” bit adapter in the butt of the knife, the larger rescue knife also has a unique bit storage unit on the side that carries two double ended bits.  This is a concept that has been done in a number of different knives and multitools, all with varying success, and I have to say, that the Kutmaster probably has the best system that both keeps the bits securely in place, but also allows for easy access to them.  In between the two bits is a slider that pushes one way to eject the double sided flathead bit, or slides the other way to eject the double ended Phillips bit.  It's a simple concept, but works very well. The only drawback, and this is a slight one in my opinion, is that it makes the handle somewhat bulky.  Holding the knife in the right hand means that the bit carrier is on the “outside” of the knife, away from the palm, and is therefore barely noticeable by your finger tips when holding the knife, and in a left handed or reverse right handed grip, the bit carrier seems to fit snugly in the hollow of your palm, in fact making the grip feel slightly more secure.

The larger model also features a pocket clip, an option that is sadly missing from the smaller model.

All in all, I like these knives, but there are a few drawbacks that need to be pointed out.  The belt cutters don't seem to be all that sharp, and therefore lose a certain amount of effectriveness.  They also aren't replaceable, which is a real drawback as a small blade locked in an enclosed frame like this is virtually impossible to sharpen effectively.  As a result, this feature is virtually worthless on these knives.

I also likely am not going to carry the smaller version as it has no suitable carry methods on it.  There's no pocket clip, no carabiner and no sheath- maybe I'm just spoiled by all the other offerings these days, and I suppose it would be ok if your car or uniform had a suitable pocket or storage spot built in, but don't count on it to carry itself so to speak. 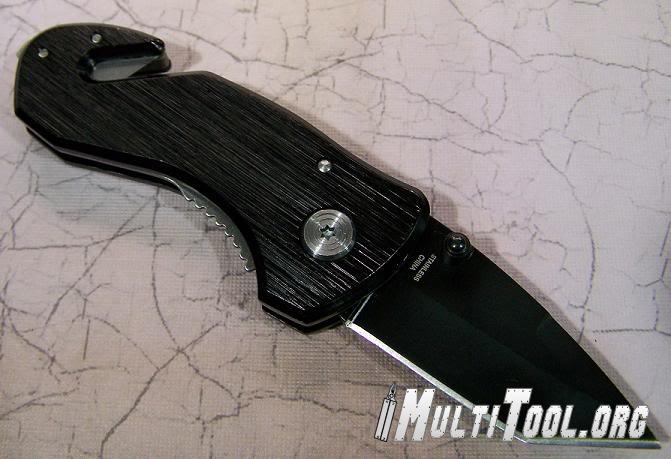 My other big issue with these rescue knives is that the tanto point is not terribly well suited to rescue operations.  Sure the tip is strong for light prying duties, but you are more likely to stab or cut anyone strapped in rather than rescue them when you use the main blade to cut through the belts or webbing holding them back, or when trying to cut away clothing to provide emergency medical services.  Many of you are going to point out that this is what the belt cutter is for, but since the belt cutter is almost non-functional on this tool, the main blade is really your only option, and it's potentially dangerous.

While this knife scores some great points, I would consider it more of a tactical/utility blade more than a rescue blade.  I'd like to see the cutter blade improved and a sheep's foot or reverse tanto type blade on this model in the future, and I think this knife could be a serious contender- especially at this price.

More in this category: « Leatherman h502 Knife Review
back to top
Interested in this or a different tool and still have more questions?
Why not join us over on the Multitool.org Forum where our community can help you find what you're looking for!